New media festivals with projects in the video games medium

There are aplenty of biennials around the world, which are dedicated to or feature new media art projects. Quite a few of them use some part of video game technology. Microsoft's Kinect is a sure favourite, but there are a lot of other video game tools being used by artist. Here I will list a few art festivals which are worth checking out and keeping tabs on for future projects - which just might touch upon gaming. Most festivals offer on-line archives of their prior projects, so even if you missed the event, you can find those interesting experiments up on the web.

Based in Manchester, United Kingdom, FutureEverything is an annual festival of ideas, digital invention, conferences and art projects. They cover a lot of bases, and their focus is new media, new ideas, new connections. As they describe themselves on their official website: "FutureEverything is about innovation in all forms, be it in research, digital media or contemporary arts and music."

This is the video part of the installation. When you roll the golden
apple into one of the furrows, you elect the corresponding goddess.
This video shows the selection screen and all of the goddesses.

"Kallisti" (greek : to the most beautiful) was inscribed upon the golden apple by Eris, goddess of discord, who was not invited to the heavenly banquet in celebration of the marriage of Peleus and Thetis. This apple was thus meant as a chord of arduous dissent to ruin the banquet. Eris rolled the apple onto the table and witnessed its induced calamity. Hera, Athena and Aphrodite claimed the golden fruit. Unable to come to an agreement, they came to as the fairest mortal. Each goddess undressed before him and then offered bribes. When he elected Ahprodite and won the heart of Helen, unbeknowst to him, Helen was already the wife of the Spartan king Menelaus. sailed to and through force claimed Helen, which enacted the tragic Trojan War. 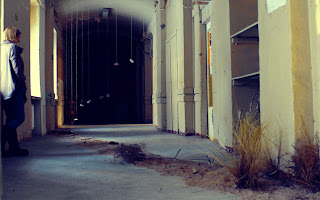